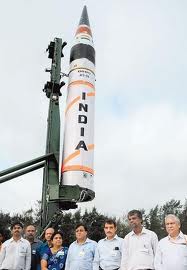 India’s first ICBM (Inter Continental Ballistic Missile), the Agni V was successfully test-fired on 19th April 2012 by DRDO (Defence Research and Development Organisation of India). This new addition to India’s arsenal will will greatly expand its reach to strike targets well beyond 5,000 kms. The news of the development of Agni V was first released in 2007 by Dr. M. Natarajan (Senior Defence Scientist of India) when he disclosed that DRDO was working on an upgraded version of Agni III. This new missile has propelled India into the elite group of five countries (the US, the UK, China, Russia and France) with the capability to launch a nuclear ballistic missile (ICBM) from a long range of over 5,000 km.

Storage and transportation of this new missile is realtively easy because it uses the canister-launch missile system, distinct from the earlier versions of Agni missiles and can carry MIRV (multiple independently targetable re-entry vehicles) payloads being concurrently developed. A single MIRV equipped missile is able to deliver multiple warheads at different targets. This will greatly influence India’s might in the region. China has already raised its concerns, saying that the actual range of the missile is 8,000 kms and India is deliberately downplaying the target range so as not to upset some countries in the European region. India has not yet clarified on this issue and maintains that the missile range is 5,000 to 5,500 kms. The Agni V missile, once fired; cannot be stopped. It travels faster than a bullet (20 times the speed of sound) and can carry 1,000 kilograms of nuclear weapons. It can be launched using a special canister. It can even be launched from a roadside!

The missile has a launch mass of about 50 tonnes and a whooping US$ 500 million (approx.) has been spent on its development. In Indian Rupees it equates to about 25,000 million (or 2,500 crore Rupees), though the actual cost of manufacturing each missile would be much less. Agni-V will incorporate advanced technologies involving ring laser gyroscope and accelerometer for navigation and guidance. It is a 3 stage missile with the first stage coming from its predecessor Agni III, a modified second stage and the third stage is miniaturised to ensure that it flies the full distance of 5,000 kms. The canister launch system will give a higher road mobility and thus much greater operational flexibility to the armed forces as compared to the earlier generations of the Agni missiles. If the sources are to believed then, the accuracy levels of Agni V and the 3,500 km range Agni IV (which was first tested in November 2011) have far better guidance and navigation systems than Agni I, II or III with ranges of 700 km, 2,000 km and 3,000 km respectively. The Agni-V will be operational by 2014–2015 after four to five repeatable tests by the DRDO. The Indian authorities believe that the solid-fuelled Agni-V is more than adequate and well prepared to meet current threat perceptions and security concerns. The missile will bring the whole of Asia, including the northernmost parts of China, 70% of Europe and other regions under its strike envelope.

What many people don’t know is that one of the main brains behind the new missile is of an extraordinary woman, Tessy Thomas (born in Allapuzha, Kerala); She is as good a ‘missile maker’ as She is a ‘homemaker’. In her circle She is also known as the ‘missile woman’ and ‘Agni-putri’. 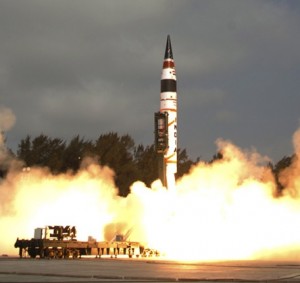 The three stage solid fuel propelled composite rocket rocket motor stages of Agni V had been tested in mid 2011; much before DRDO was prepared for the comprehensive final testing.
On 19 April 2012 at 8.07 am, the Agni V was successfully test-fired by DRDO from Wheeler Island off the coast of Orissa. A rail mobile launcher was used for the test launch, which was made from the launch complex 4 of the ITR (Integrated Test Range) at wheeler island off the coast of Odisha (also known as Orissa). The flight time during the test was 20 minutes and the third stage fired the re-entry vehicle into the atmosphere at an altitude of 100 km. The missile re-entry vehicle subsequently impacted the pre-designated target point more than 5,000 kilometres (3,125 miles) away in the Indian Ocean. According to reports the missile hit the designated target with pin point accuracy (within few meters of the designated target point).

Three stage solid fuelled missile with composite motor casing in third stage. Two stages of this missile will be made of composite material. Advanced technologies like ring laser gyroscope and accelerometer will be used in the new missile. The range of 5,000 kms can be further increased by reducing the payload.
It is specially tailored for road mobility as it is canisterised. Now that India has successfully developed the canister, other existing and future missiles will also benefit from this technology. Made of maraging steel, a canister must provide a hermetically sealed atmosphere that preserves the missile for years. During firing, the canister must absorb enormous stresses when a thrust of 300 to 400 tonnes is generated to eject the 50-tonne missile.
Agni-V will feature MIRVs (Multiple Independent Re-entry Vehicles) with each missile capable of carrying 2–10 separate nuclear warheads. Each warhead can be assigned to a different target, which could be near each other or even hundreds of kilometers apart; alternatively, two or more warheads can be assigned to one single target. MIRVs ensure a credible second strike capability even with a few missiles.