Scientists from the Nanyang Technological University (NTU) and A*STAR’s Institute for Infocomm Research (I²R) have answered this call with their latest innovation in this field. They have created a Microchip that can transmit huge volumes of data at an ultra high speed of 2 GB per second. Translated into tangible terms, it cam transfer more than 100 songs (mp3 format) from one friend’s mobile device to another in less than 1 second. This speed is about 1,000 times faster than a traditional Bluetooth transfer and uses very less of battery power. The chipset makes use of wireless millimetre-wave (mm-wave) technology to transmit data.

This will enable low-power applications, like smart phones and tablets, to transmit/receive data between platforms, like projectors and TVs, without the need for cables for the very first time.

Professor Yeo Kiat Seng, the principal architect of the ambitious project gave the following statement, “The demand for ultra high-speed wireless connectivity has fuelled the need for faster data transfer rates. Unfortunately, current technologies are unable to meet these stringent demands. The NTU-I2R team, being at the cutting edge of research and development, has successfully demonstrated an integrated 60GHz chipset for multi-gigabits per second wireless transmission.”

This is what NTU’s Prof Yeo, who is also founding director of NTU’s VIRTUS IC Design Centre of Excellence, had to say about the new technology, “This ground-breaking mm-wave integrated circuit (IC) technology will have significant commercial impact, enabling a wide range of new applications such as wireless display, mobile-distributed computing, live high-definition video streaming, real-time interactive multi-user gaming, and more.”

The chipset has been named as VIRTUS and it consists of three components. An antenna, a full radio-frequency transceiver (developed by NTU) and a baseband processor (developed by I²R).

The antenna is connected to the transceiver, which filters and amplifies the signals. Then it passes the signals to the baseband processor, which comprises of non-linear analog signal processing and unique digital parallel processing and decoder architecture – this is the key to its low power consumption.

The scientists from NTU and I²R is the first such team in the world to successfully put together an integrated low-power 60 Gigahertz (GHz) chipset solution which consists of the three components, which takes the technology one step closer to commercialisation and mass production. It is also the first team (as far as understood) to demonstrate one of the technology’s applications – in the form of a high-definition wireless video stream.

The VIRTUS chipset has already garnered 16 international patents. It has also, already been featured in as many as 51 top-tier international journal and conference papers. Apart from this, it also has other international accolades such as two best paper awards and two best chip design awards. 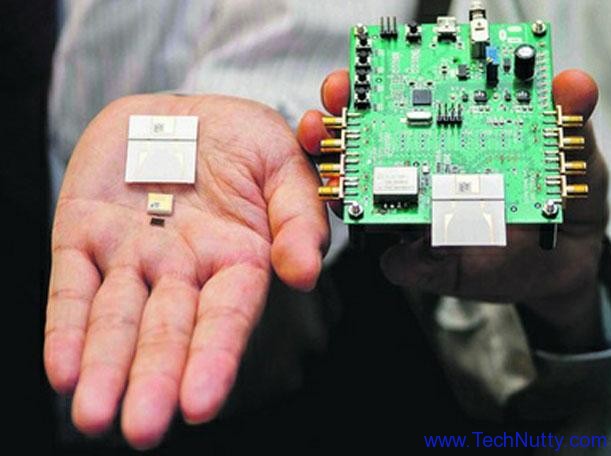 Afraid of the injection needle and so, avoiding your visit to the doctor for your shot? Technology is at your service with the solution. As soon as this new device developed by a team of...