iBall entered the market as a low key computer peripheral manufacturer and now has an enviable range of products ranging from popular computer peripherals to budget phones to tablets. After launching many new stylish and affordable budget phones, iBall has now launched its new tablet – the Slide i7218 which retains the best abilities of its predecessor and also adds some new attributes.

Talking of new attributes, the iBall Slide i7218 has dual stereo speakers which enhances the listening as well as the viewing experience.Unlike some other budget tablets which pack a front VGA camera, the Slide boasts of a double camera. A 2 megapixel camera at the back and a front VGA camera which enables video conferencing. It also has a USB drive which supports most peripherals.

Weighing 450 grams, it has a 7 inch capacitive touch screen with a pixel resolution of 800 X 480. The processor is a 1 Ghz ARM Cortex A8 and the operating platform is the Android 2.3. It has an 8 GB built in memory which is extendable to 32 GB. Other features include wi-fi, bluetooth, 3G support and an HDMI port. It comes loaded with applications like Facebook, Gmail, Money control, New and Weather, Nimbuzz and ofcourse, the Android Market.

Since much enhancement has not been made to the newer version, iBall has decided to give it a decent price. The previous version was launched for 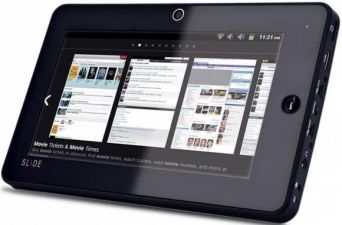 Google has announced the launch of its new Android based 7 inch tablet today. Named as the "Nexus 7", it is being built by a leading hardware manufacturer from Taiwan, 'Asus'. The Google Nexus 7...

The tablet market in the price range of Rs.15,000/- or less is hotting up with the Micromax funbook, Ainol Novo 7 and Zync to name a few. At this time Intex has entered the...

The latest tablet to be launched in the "Rock Bottom Price" category is the Micromax Funbook at a price of   6,499/- Currently it is one of the cheapest Android 4.0 based tablets available in the...