Currently it is one of the cheapest Android 4.0 based tablets available in the market. Is the Micromax Funbook worth its mettle? Let’s try to find out.

According to Micromax, this is the first tablet to be fully developed in India. While that doesn’t talk much about the product, it is one of the better built below

10,000/- Android tablets that can be found in the market. It feels incredibly light in your hand. It’s quite slim as well, making it a very good eBook reader. Another good aspect about the design is that it does not make creaking sounds even if pressure is applied around the corners. Fingerprint residue on the glass screen seems unavoidable as is the case with most tablets.

The bezel could have been thinner as it’s too thick and makes the screen appear tiny. Unlike other touch screen tablets, the buttons for ‘Home’, ‘Back’and ‘Options’ are physical which simply add to the space and could have been avoided.
The connections include a miniUSB port, microHDMI, SD Card slot and a charging port. The USB port also supports USB-on-the-go and Micromax bundles along the cable as well in the box.

Features
The Funbook comes equipped with Android 4.0.3 operating platform without any skin running on top so one gets the pure ICS experience. The interface may be quick to respond, but there are times when it just slows down and get a bit sluggish. The touch sensitivity is average. If one annoying feature needs to be named, then it would be the time it takes to wake up from sleep mode. After pressing the power button, one need to wait for about 2 or more seconds before the screen turns on. Now 2 seconds may not sound much, but it does get irritating at times. Considering that it packs in a pretty powerful SoC, the extra time taken seems a bit strange. 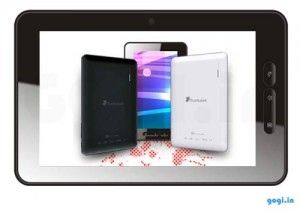 Talking about the better features, an ARM Cortex-A8 single-core CPU is used by micromax in its Funbook which runs at 1.2GHz. The NEON technology from ARM works in tandem with the Mali-400 MP GPU which allows it to easily offload and decode almost any type of video file, irrespective of the container or codec. The 512MB RAM, ensures a very good multimedia experience. While the Mali-400 MP GPU is quite capable, not all games can be played very smoothly. Popular games like Angry Birds Space run fine though.

The screen has a pixel resolution of 800 X 480 which is not too good for sharp reading. Also, the whole aspect ratio of the display seems skewed as the menus and home screen appear stretched. Though minor, but the issue exists. Also, some of the bundled applications don’t seem to fit in well in full screen mode. One of the examples is GTalk which appears weird on this tablet.

For the price that it is being offered, it packs in enough punch for the entry level tablet operator. 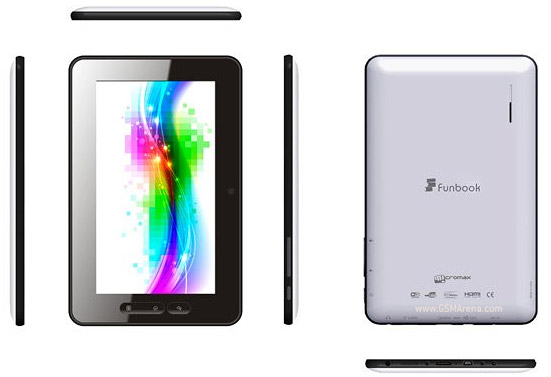 Google has announced the launch of its new Android based 7 inch tablet today. Named as the "Nexus 7", it is being built by a leading hardware manufacturer from Taiwan, 'Asus'. The Google Nexus 7...

The tablet market in the price range of Rs.15,000/- or less is hotting up with the Micromax funbook, Ainol Novo 7 and Zync to name a few. At this time Intex has entered the...