Now, generate electricity from your footsteps

EVERY STEP YOU TAKE IS POWERFUL

Now, generate power from your footsteps

Just imagine electricity being generated right inside your shoes while you walk or run. Sounds utopian. But, this could soon be a reality, say scientists who have developed a paper-thin generator that harnesses the mechanical energy of one’s steps. An international team says these “living generators” use viruses to convert the soles of one’s shoes into electricity.
So far, the generators can only create enough power to run a small LCD panel (about a quarter of the power of a AAA battery) — but work in the laboratory simply by tapping a finger on an electrode, the ‘Daily Mail’ reported.
In the future, the scientists could be used to power everything from portable electronics like phones — powered by footsteps — to lighting systems, powered by similar panels inside doors.
The viruses are harmless — built to “harness” physical stress in an object to generate electricity. The technology already works — at least in the laboratory, say scientists at the US department of energy’s Lawrence Berkeley National Lab. They tested their approach by creating a generator that produces enough current to operate a small liquid-crystal display. It works by tapping a finger on a postage stampsized electrode coated with specially engineered viruses. 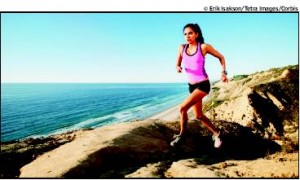 The viruses convert the force of the tap into an electric charge. This generator is the first to produce electricity by harnessing the piezoelectric properties of a biological material. Piezoelectricity is the accumulation of a charge in a solid in response to mechanical stress. The milestone could lead to tiny devices that harvest electrical energy from the vibrations of everyday tasks such as shutting a door or climbing stairs, the ‘Nature Nanotechnology’ reported.
“”More research is needed, but our work is a promising first step toward the development of personal power generators, and other devices based on viral electronics”, said Seung-Wuk Lee of the Berkeley Lab.

The new generation has probably not even heard of "Infra-red" data transfer, which was the pioneering technology in wireless data transfer. It needed the two IR compatible devices placed against each other for data...