Man has constantly been in the endeavor to evolve technology to higher and higher levels, but man himself has posed the biggest challenge. To get through the complex system present in a human being’s body and to understand it to an extent that it can be evolved has been the fascination of Bio-technologists. Taking one giant step forward, a group of Bio-engineers at Stanford University claim to have made a component that can be called a genetic equivalent of a memory device. A Re-writable DNA memory that works in living cells and can retain its data even as the cells divide and multiply. The report of this breakthrough has been published in “Proceedings of the National Academy of Sciences”.

This is not the first step of this Bio-evolution process, as DNA memory already exists but yet, it moves to the next level as previously, DNA memory has been limited to write-once versions that can record only as many cellular events as there are bits. But the reversible storage system that the Stanford researchers have now brought up is capable of being expanded to record a potentially huge number of events—2n events, where n is the number of bits. Being reversible means that the data can be erased and then re-stored, making it equivalent to a Re-writable data storage device.

The immediate application of this technology could enhance the study of how we age and how cancer grows but as the technology is evolved in the future, it could lead to a much wider application. Maybe it becomes possible to re-program the DNA cells to slow the ageing process, prevent life threatening diseases like cancer and who knows one day could change the characteristics of a person altogether.

How it writes and Re-writes

The Bio-engineers at Stanford call it the ‘RAD’ or, Re-writable recombinase Addressable Data Module. It is basically a segment of the DNA that can switch between states when the bacteria carrying it encounters some specific proteins. A particular class of proteins called, “integrases” scan the DNA sequences until they find two specific sequences (attachment sites called attB and attP) and bind to them. The integrase then cuts out the DNA strand between those sites, flips it over, and reattaches it so that string of base pairs reads in reverse. This chemical process, which the researchers refer to as “setting,” also has the ability to change the characteristics of the attachment sites attB and attP. (After change they may be called attL and attR, respectively.) This upside-down state, says the Stanford team, is the equivalent of a 1 in an electronic memory device.

By adding integrase mixed with another class of protein called “excisionases” reverses the process, in other words, “resetting” the DNA strand to its original, or O state. (Interesting to note here that the Excisionase class of protein, alone has no effect that anyone is aware of.)

The major technical hurdle that the group of developers had to overcome was avoiding what’s called “bidirectionality”, according to Drew Andy, an assistant professor at the Stanford University. “Bidirectionality” basically, is the tendency for some recombinase proteins (the respective versions of integrase and excisionase that the researchers chose are two of many) to cause the RAD module to flip, and then to cause it to flip back to its previous state before the change in state is recorded. But the researchers were finally able to create a system of DNA registers that switch, when and only when, they’re in the presence of the protein-based inducers. The most important achievement, according to them, is that the states can be switched repeatedly with no performance degradation.

How much data the device that has been demonstrated is able to store? According to Endy, it is currently capable of storing 1 bit, as in roughly a hundred billionth of the amount of data that can be stored on a key-fob-size USB pen drive. Though the DNA memory device’s capacity is relatively minuscule, “its purpose is not to compete with silicon, but to get access to data storage in places where silicon doesn’t work,” he says.

In fact, he explains furter, 8 bits of data is more than enough to keep track of changes in any replicating biological system. With that capacity, he envisions applications such as a fail-safe element in cellular therapeutics. 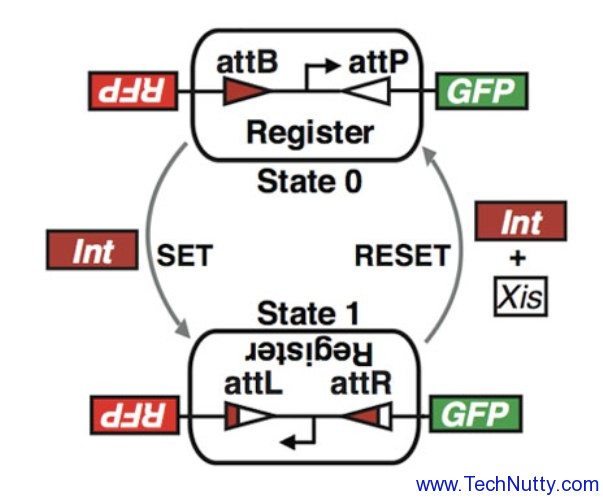 Tech News14Innovation7Accessories6How to?6Tablets5
Previous articleEnd of the road for Bluetooth? New VIRTUS microchip transmits data 1000 times faster than Bluetooth
Next articleSteve Jobs: The genius who made computers loved by people around the world
Tech News