Telephone, Data Transfer and Internet… what is the similarity between them? They all started with being wired and graduated to being wireless. Remote controls were among the first instruments to go wireless and a person named Nikola Tesla had filed for a patent in the US in 1893 which described a remote control (Though one of the first remote controls was introduced by a company called ‘Zenith Radio Corporation in 1950 which became commercially available in 1956).

Man has continuously been in the endeavor to eliminate wires from its systems and ‘Wireless power transmission’ is definitely on the minds of researchers. Back in the late 1800’s, Tesla had imagined a world full of ‘Tesla’ coils and probably at that very time, the dream of wireless power transmission was first seen. Till now it has been a dream, but a lot of efforts have been made to achieve this dream. It is a separate story that till now, apart from advances in recharging electric toothbrushes, wireless power has not been able to make significant inroads into consumer-level products.

What is it all about?

Nikola Tesla had proposed transmission of high-potential, high-frequency alternating current through the earth with an atmospheric return circuit for transmission of power and signals. Tesla’s method relied on alternating current to be transmitted through atmospheric strata having a barometric pressure even greater than 130 millimeters of mercury. Tesla proposed to induce current flows by means of electrostatic induction through the lower atmosphere up to about two or three miles above the Earth’s surface. Tesla theorized that electrical energy can be transmitted through the earth and the atmosphere. In the course of his research he successfully lit lamps at moderate distances and was able to detect the transmitted energy at much greater distances.

All through these years, researchers have tried to comprehend the methods proposed then and constantly tried to innovate on their own. About four years back, researchers from Intel had demonstrated a method–based on MIT research–for throwing electricity a distance of a few feet, without wires and more importantly, without any danger to bystanders. Named as “wireless resonant energy link”, it works by sending a specific, 10-MHz signal through a coil of wire; a similar, nearby coil of wire resonates in tune with the frequency, causing electrons to flow through that coil too. Though the design is not exactly something to cheer about, it was able to light up a 60-watt bulb with 70 percent efficiency.

Can it become a reality?

A number of problems and obstacles still remain, to be able to achieve the more specific targets. One of them is that the above project uses alternating current. To charge gadgets, a direct-current version needs to be developed and the size of the apparatus needs to be considerably reduced (for practical usability). Numerous regulatory hurdles would likely have to be cleared in commercializing such a system, and it would have to be thoroughly checked and re-checked for safety concerns.

Even though prediction of time for a technology to develop at such early stages is not exactly possible as it could take much longer or much less time, still if we try to make an estimate and assume that efforts in this direction go reasonably well, such receiving circuitry could be integrated into the back of your laptop screen in roughly the next six to eight years. It would then be a simple matter for your local airport or even favorite coffee shop, to embed the companion power transmitters right into the walls of their buildings and you will be able get a quick charge without even opening up your laptop bag. 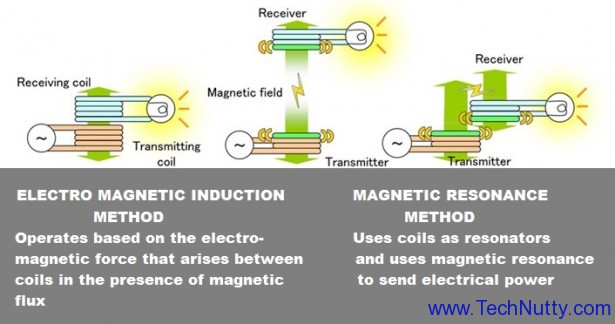 Tech News14Innovation7Accessories6How to?6Tablets5
Previous articleHow to save petrol – some simple tips
Next articleToshiba introduces ApriPetit – a Robot that talks to you
Innovation

The new generation has probably not even heard of "Infra-red" data transfer, which was the pioneering technology in wireless data transfer. It needed the two IR compatible devices placed against each other for data...

Afraid of the injection needle and so, avoiding your visit to the doctor for your shot? Technology is at your service with the solution. As soon as this new device developed by a team of...